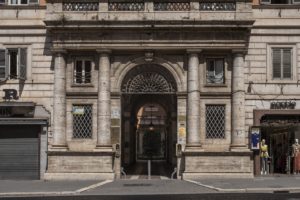 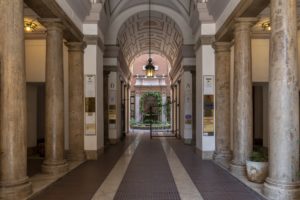 Il Fascino di Roma is located in Via Firenze 25, a side road finishing on Via Nazionale, a famous shopping street, very close (just 150m) to Repubblica Tube Station and Teatro dell’Opera.

Our Guest House is on the first floor of an elegant palace built in the 19th century. 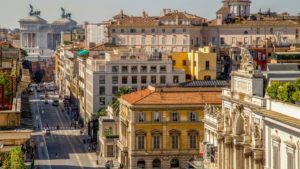 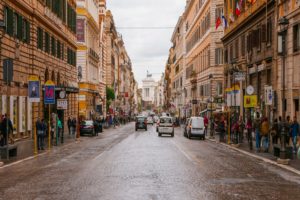 Located 400m from the termini Train Station,  (the main train station in Roma) Starting by  piazza della Repubblica, via Nazionale is a slight downhill that, beginning with Piazza della Repubblica goes straight to largo Magnanapoli, behind Piazza Venezia. A pleasant walk through via Nazionale is a must for everyone wants to get in touch with the deep soul of Roma. Shops, clubs, ancient buildings, museums, churches and panoramic spots. A mix of emotions and sensations that goes deeply through this great and elegant streetline crossing Monti District. Down via Nazionale there are various fine pieces belonging to Risorgimento, all dated around last decades of the 19th century San Paolo dentro le Mura (1880) the first christian Church built in Rome after the reinufication of Italy,  Palazzo delle Esposizioni (1883), famous location hosting important events, Palazzo Koch (1892), current house of Banca d’Italia, Teatro Eliseo (built in 1900), Teatro dell’Opera and Galleria Nazionale d’Arte Antica, where some pastepieces of Italian painting from 16th – 17th century and French wonderful paintings from 1700. For shopping lovers we must suggest some very cult shops. David Saddler at 184/c, Elena Mirò at 197, Brooks Ltd at 228, Benetton at 176, Intimissimi at 189 and 227, Calzedonia at 185 and 238, Segue at 57, Beauty Point at 50, Frette at 80, Melbookstore at 252. 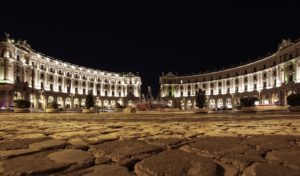 Piazza della Repubblica, also known as Piazza Esedra till the Rome Olimpic Games in 1960, is located close to the Termini, in front of Terme di Diocleziano, that can be seen by the square. Terme di Diocleziano, built in 306 D.Sc., are the oldest and biggest baths of all the roman world. Today they host for the most part the epigraphic museum, that collects written documents on various supports from 700 B.C to 300 A.C.

The first name of this square, very famous also today, takes from the big roman bath exedra, who is contained in the semi-circular column line of the square. The arcades were built to remind the ancient buildings once were there: all the buildings are from 1887-1898 by Gaetano Koch.

On the square we find the basilica di Santa Maria degli Angeli e dei Martiri, built into a side the imperial roman bath: Michelangelo raised the vast church with greek cross pattern from the tepidarium. At the very center of the square there’s one of the most famous fountains in Rome: the Fontana delle Naiadi, a wonderful work by Mario Rutelli in 1901. The naiadi you can admire are Nynph of Lakes, with a swan at her side, la Nynph of Rivers, laying down on a river monster, and the Nynph of Oceans, on a horse that represents the see, and the Nynph of Underground Waters, with a mysterious dragon.